The first generation of Safety Film is believed to have been developed in the early 1970’s. The product was developed for the British Government as a way to mitigate the deadly effects of flying and falling glass in terrorist bombings that were rampant throughout England, Northern Ireland and Europe at that time. Because of its success in the field, the product gained broader exposure and awareness leading to greater usage in Europe and other overseas markets.

Glass is a truly amazing and most useful product. Its presence is seen and felt every day by virtually every living individual. Despite its wondrous benefits, however, glass poses a potential risk to human life and property when it breaks. Unfortunately, it is not a matter of “if” a particular piece of glass will break, but more likely “when” it will break!

Equally amazing as glass is a product referred to as Safety Film. It is a product whose purpose is to mitigate or lessen the harmful consequences of glass that is broken by man or nature. Like glass, Safety Film is optically clear and highly transparent. Safety Film allows visible light to pass through it, but unlike glass, it is not brittle and easily subject to “breaking’. In fact, it is considered to be “elastomeric”, that is, having the ability to stretch. Safety Film is installed (applied) to the interior surface of existing glass using extremely aggressive pressure sensitive acrylic adhesive. This adhesive/Safety Film combination helps hold together glass that is broken by some outside event.

Safety Film sales in the U.S. were significantly impacted by several highly publicized random events and natural disasters in the late 1980’s and early 1990’s.

These highly publicized headline events awakened citizens throughout the U.S. to the dangers of natural disasters and terrorism. The loss of life and property damage wrought by these events was staggering. People also witnessed numerous disasters such as tornadoes and floods, along with increasing instances of vandalism, social disobedience, and crime throughout the country. Most importantly, people began to see and understand (with the help of window film manufactures and dealers) the unfavorable role that broken glass played in all of these events.

All of these factors have helped stimulate solid growth for Safety and Security Window Film Products. 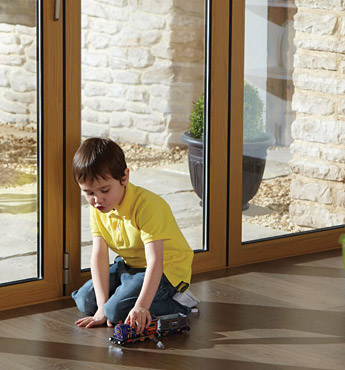 Our invisible safety film can even be applied to mirrors, china cabinets, and glass tables!